Why Americans no longer trust the mainstream media 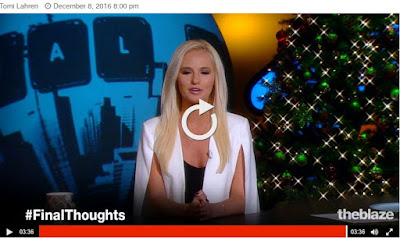 Tomi Lahren is sick of the mainstream media and the failed Democratic Party blaming fake news for the election of Donald Trump.  She accepts there is fake news on Facebook, but that’s not why Trump was elected.
“We already know Facebook is in the business of censoring and de-prioritizing conservative leaning posts.  The American people don’t trust the mainstream media anymore and why the hell should we?”
To see more from Tomi, visit her channel on TheBlaze and watch full episodes of “Tomi” live weekdays 7–8pm ET or anytime on-demand at TheBlaze TV.

Posted by John Fisher at 3:49 PM No comments:

‘It Isn’t Getting Old For Him’: Megyn Kelly Swipes at Obama For Blaming ...

Megyn Kelly loses her cool, is rude, and creates falsehoods in interview with Newt Gingrich

Last night (October 25, 2016) Megyn Kelly lost my vote.  I considered her one of the best journalists on the national scene. Always, objective; always digging deeper to get the underlying story. And with great wit. Then, she interviewed Newt Gingrich. She showed how thin skinned she really is.

Firstly, let me say, I'm not a fan of either Newt Gingrich or Donald Trump. But I am a supporter of good journalism, which I define as objective, fair, and balanced. I have taught media studies at the university level for over 35 years. I would like to define two concepts from my teaching of journalism: framing and narrative.

Framing theory is the notion that "the media focuses attention on certain events and then places them within a field of meaning." The problem with framing is that the journalist provides meaning and context to the event, rather than the audience. Also, "television determines what we believe to be important issues largely by paying attention to some problems and ignoring or paying minimal attention to others" (London, 1993).

In addition to framing, journalists often create a narrative or story that is supposed to provide context, but also may create falsehoods, thus the name false narrative. The false narrative fashions an image that is not true. In fact, it may be based on red herrings and straw men designed to take attention from the truth. Once created the narrative is hard to shake or change.

In the Gingrich interview on October 25, Kelly created a frame and narrative by her choice of words. In one instance, she said "if he is a sexual predator" (referring to Trump). The choice of words calls up all sorts of images beyond the real story, framing the story as about sexual abuse, not false accusations.

Suggesting the narrative also offers the possibility that Kelly may believe it. She tries to support the claim by mentioning Trump's 10 accusers. Gingrich taunts Kelly. He says she is fascinated with sex. He tells her to say what she thinks. At that point, I think she losses her "cool," realizing she may no longer be in control of the interview.

Kelly stays safely hidden behind her narrative. She carefully chooses her words but through her words frames the story and creates a narrative that may not be true.

"Sexual predator" is an extreme along a continuum where "flirt" might be at the other end. She could have just as easily said Trumps actions are flirtatious. Flirt creates a totally different narrative and has a different meaning. You can see how narratives are formed.

In the other instance, in the last words of the interview, where Kelly has the final say, she suggests Newt Gingrich needs anger management. She accuses him of becoming angry, when in fact it appears that she lost her composure. as proved by her rude and snide remark at the end of the interview. As a journalist and interviewer, she was in a position of power - and she abused her power.

Both instances prove to me Kelly is not the good journalist I once thought she was. Hard hitting - yes - but not fair or objective.