Top talk radio host Dr. Laura Schlessinger tells Newsmax that the "bullying and scary" tactics of the left are a direct threat to the First Amendment rights of anyone who dares to speak out in defense of traditional American values.

The best-selling author and syndicated Newsmax columnist announced on CNN's Larry King show Tuesday night that she will leave the radio airwaves at year's end.

But in an exclusive interview with Newsmax, Schlessinger says that, although the broadside over her neutral use of the N-word on her radio program was "the last straw," it was not the true reason she's decided to leave her long-time syndicated radio program.

Rather, she says those who viciously attack conservative talk hosts in the name of political correctness effectively have taken away her First Amendment rights.

Check out the article at Newsmax.com:
/Headline/dr-laura-schlessinger-quits-radio-interview-newsmax-larry-king-racism/2010/08/18/id/367833
Posted by John Fisher at 3:57 PM 1 comment: 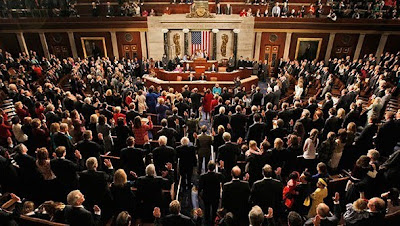 Posted by John Fisher at 4:49 PM No comments:

Effect of the media on political rhetoric

The media cause politicians to be careful about how they vote and also on what they say about issues, writes Dan F. Hahn (Political Communication, Strata Publishing Co., State College, PA, 2003, p. 259).
On one hand, to be politically correct politicians avoid "class warfare," but yet to get elected they have to boast about what they have done and will do for the middle class. To be credible they have to appear sincere.
Hahn quotes Robert Brustein, the former dean of the Yale School of Drama, who claims credibility is created by good acting, not politics. It concerns "simulating the role of sincerity" rather than "verifying facts or discovering the truth" (R. Brustein, "News Theater," New York Times Magazine, 16 June 1974, p. 7).
This is driven by the media focus on personality. Shakespeare was right, says Brustein. Because "all the world's a stage," the audience's attention is directed toward the political actor and away from the political action. While television allows the audience to get to know the president, the president is unable to reciprocate. The sense of familiarity may work against the president. President Obama's "hope and change" platitudes may have backfired as he fights to raise his popularity in the polls from the lowest figures of any previous president. His words don't match the perceived in action of the economy.
One technique is to present all issues as crises. The president directs us away from the one-sidedness of the relationship by making every instance in which he speaks sound like a crisis. The crisis brings us together as a people, making us far easier to manage than if we were individuals who feel dejected because the president can't address our needs.
However, sometimes the crisis approach backfires. President Obama's chief of staff, Rahm Emanual, stated, "Rule one: Never allow a crisis go to waste" (Jeff Zeleny, Obama weighs quick undoing of Bush policy, New York Times, 9 November 2008,  http://www.nytimes.com/2008/11/10/us/politics/10obama.html). The result has been the quick passage of stimulus bills and healthcare reform, both unpopular with the American public.

The effects of the television on politicians 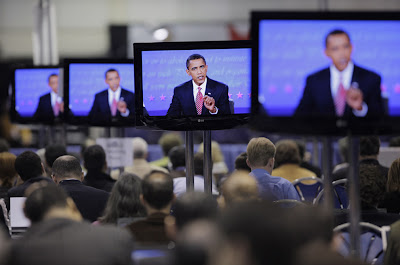 Dan F. Hahn (Political Communication, Strata Publishing Co., State College, PA, 2003, p. 257) suggests some ways in which the media affect politicians and the election process.
1. The cost of advertising means that politicians must spend much of their time fund raising. It obligates them later to major campaign contributors.
2. Television shows the intra-party squabbles during the primary process. It makes it difficult to get all party members onside when beginning the campaign against the opposition.
3. The focus on personal lives (which began in the 1960s) keeps many potential candidates from running and puts stress on the candidates and their families.
4. Politicians structure their campaigns to attract television coverage. For example, they learn to deliver messages in 10-second sound bites.
5. Television doesn't allow the politician to be reflective on-air. Rather candidates appear "glib" and absolute rather than moderate in their viewpoints.
6. Candidates must appear to be humorous, making it mandatory to appear on late-night shows, like Saturday Night Live, Jay Leno, or Letterman.

Posted by John Fisher at 5:36 PM No comments:

Get monitor to work when laptop lid closed

Here is one solution.

Rest a lollipop stick on the power button before the lid closes, works
everytime.

If that doesn't work, try this one.

Go in control panel>performance and maintenance>power
options>advanced. There is an option: " When I close lid of laptop..."
Select "DO NOTHING." That solves the problem.

Posted by John Fisher at 5:20 PM No comments: